6 Reasons Why PEX Plumbing Is Bad for Your House 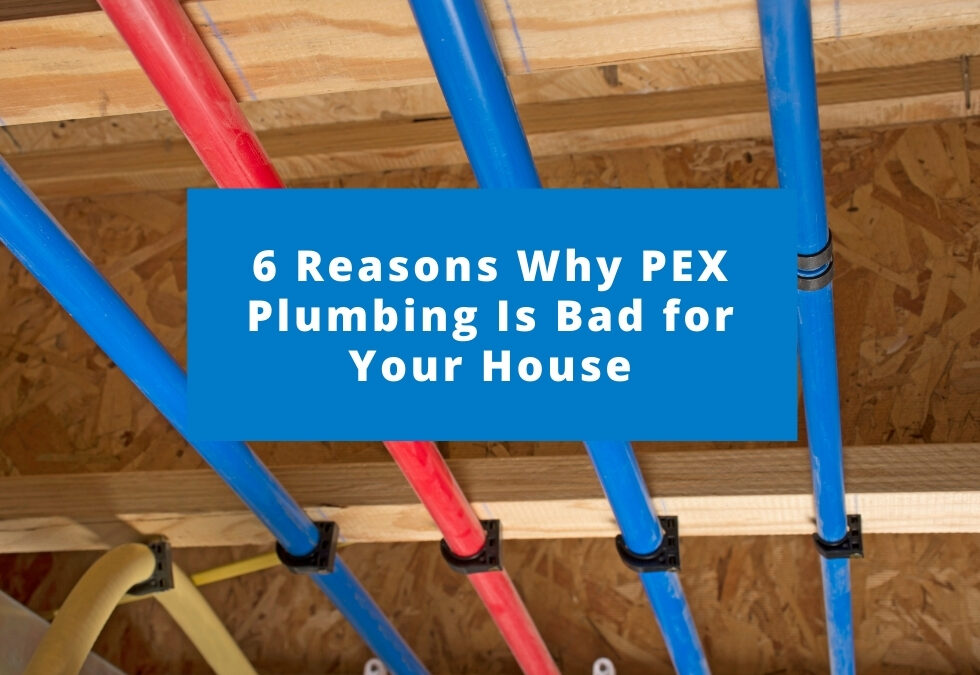 Polymers, plastic, and all kinds of synthetic material are replacing the good old days of metals when it comes to housing and construction. One of these popular furnishings is PEX plumbing pipes. PEX pipes became popular in the ‘80s and ‘90s and thousands of houses today still have them. While they were all the rage when they first came out, over the years, many of its shortcomings have come to light.

If you’re considering PEX plumbing in your house, you might want to reconsider. Here’s why:

What is PEX Plumbing?

According to The Balance Small Business, PEX is a cross-linked polyethylene in a tube form for plumbing purposes. The high prices of copper led many people to opt for PEX plumbing. PEX material is also favored for its flexibility when it comes to fitting. PEX can be bent around to accommodate a good fitting and is preferred over copper and polyvinyl chloride piping. Undoubtedly, PEX pipes are one of the easiest pipes to install. However, they come with quite a few downsides and could end up costing house owners thousands of dollars in damage.

Let’s discuss in details: why PEX plumbing is bad for your house:

Why is PEX Plumbing Bad for Your House:

PEX plumbing and chlorine do not mix well, which is ironic. Chlorination badly affects the durability of the PEX plumbing system and shortens its lifespan. The chlorine in the water inside PEX pipes speed-up the brittle oxidative failure of cross-linked polyethylene. This failure leads to sudden leakage and sometimes even bursting of the pipes.

To combat this failure, manufacturers began to add antioxidants into the PEX piping.  However, it only ended up delaying the oxidation to a slight degree. Now, the chlorine degrades the antioxidants first but eventually ends up reaching the pipe and causing failure.

PEX plumbing lacks versatility because of its sensitivity to light. PEX cannot be taken anywhere outside the house where it is directly exposed to UV for a long period. The synthetic material of the pipes can slowly disintegrate due to the light of the sun. Even light bulbs have been known to affect the lifespan of PEX water lines.

While this is a rare failure, it still happens. Under unique circumstances, PEX water lines become highly susceptible to bacteria. This mostly happens when PEX pipes are installed deep under the ground and vulnerable to moisture. In extreme cases, the bacteria caused by moisture can penetrate inside the PEX pipes and contaminate the water.

As is the case with most plastics, PEX pipes are also non-recyclable. Large pieces of PEX pipes are discarded when new water lines are installed. Unfortunately, we have yet to find a way to bring these discarded pipes back to use. Until then, all that plastic has nowhere to go.

A very common problem reported by many users is that PEX pipes are vulnerable to rodent attacks. Unlike copper pipes, rodents’ sharp teeth can easily chew through PEX water lines. This damages the entire waterline and eventually leads to leakage and contamination. If your house has a particular rodent problem then have your water lines checked and opt for a material that is resistant to rodent attacks.

One of the biggest downsides of PEX plumbing is that some of them affect the taste and odor of water. It’s important to know about this risk before installing PEX water lines in your house. In some cases, the smell and taste are so unpleasant, that people have to replace the pipes all over again. Due to a lack of research on the subject, the reasons behind the unpleasant taste and smell are unknown.

The following options might be costlier than the plastic plumbing, but they’d last a long time and give you the ultimate peace of mind. Here you go:

Are you living in an old home and have never given much thought to the kind of materials used in your water lines? Perhaps it’s time that you get them inspected and see for yourself how much outdated and deteriorated they have gotten over time. In case you are building a new home, make sure you conduct proper research before deciding what kind of water lines you want in your home. One wrong decision can put your family’s health at risk. Contact your trusted plumbing company in Halifax today and get your free quote!